MEDITERRANEAN FRENCH CUISINE COMES FROM
PROVENCE, OCCITANIA, AND THE ISLAND OF CORSICA
BACK TO CUISINES

EATING LOCALLY-SOURCED FOODS IS A CORNERSTONE OF FRENCH FOOD AND THERE ARE DISTINCT TRADITIONS IN EVERY REGION.

Distinctive dishes that make use of local ingredients include bouillabaisse and salade niçoise.

Bouillabaisse is a substantial dish from the French port of Marseille, capital of Provence. It is a stew for at least eight people, because it should contain many kinds of fish such as crayfish, gurnard, weever, John Dory, monkfish, conger eel, whiting, sea bass, and crab. These are cooked with Mediterranean vegetables and herbs, namely onions, garlic, tomatoes, thyme, fennel, parsley, bay, and orange peel.

Salade niçoise is a colorful salad of tomatoes, tuna, hard-boiled eggs, Niçoise olives, and anchovies, dressed with a vinaigrette. 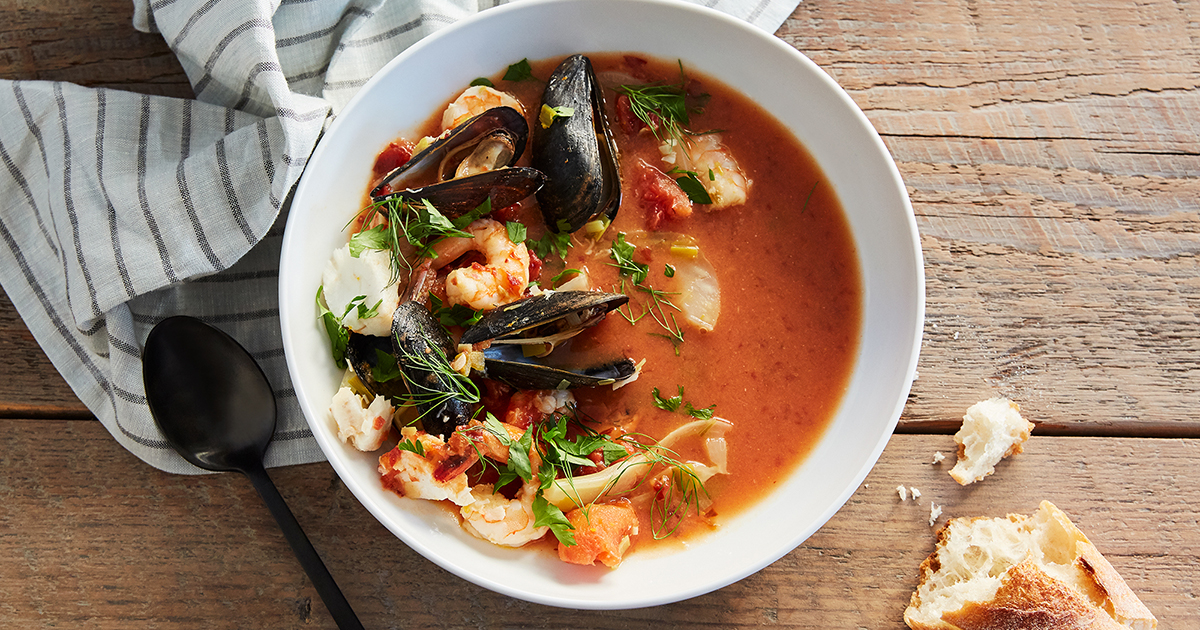 Soupe gratinée à l’oignon: Perhaps one of the most famous national dishes, French onion soup dates back to Ancient Roman times. The modern interpretation originated in Paris in the 18th century. This dish is so popular, it’s commonly available in America, but often those preparations are mediocre. The French gently caramelize onions in butter, then slowly cook them in a meat stock. Towards the end of cooking, wine or brandy is added (in the Mediterranean, they often use authentic Portuguese port), then topped with a piece of bread and melted cheese. It’s ideal for a starter or a light meal in itself.

Boeuf bourguignon: Another classic French dish, boeuf bourguignon originated in the Burgundy region of France, as the name implies. Largely popularized in America by Julia Child, this is another dish worth having in France, prepared as it was meant to be. This rich beef stew, slowly cooked in red wine, with bacon, spices, carrots, onions, and potatoes, is a spectacular example of French cuisine.

Bouillabaisse: Bouillabaisse was born in the port city of Marseille, where it remains a significant part of local culture. While all preparations of this rich fish stew agree that it relies upon fresh, local, bony Mediterranean fish, olive oil, and saffron, every family in Marseille has their own recipe handed down through the generations, and every restaurant claims that their version is the most authentic.

A visit to France is a singular opportunity for food lovers to explore food and food culture, and is not to be compared with simply eating French food in other parts of the world. Locals benefit from extreme French scrutiny of the quality of ingredients, authenticity of sourcing, and meticulous preparation, making it a dining destination unlike any other.